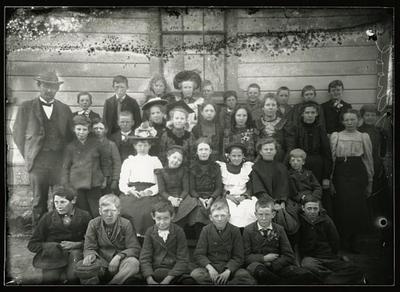 School Group Portrait.
34 people.
Notation: 1st Ward School.
Built in 1884. 311 south 100 east. Became Webster School (still under question). The First Ward erected a rock school in 1884. The building was referred to as “the old rock school” until an adobe addition was built and officially called the Webster School. It was used as the chapel as well, until a brick building was built. It also closed in 1911 and was then used as a recreation hall until the ward campus was sold to the Presbyterian Church in 1954. Remodeled and used as a chapel by the Presbyterian Church, this is the only one of the original ward schools that remain.
Dimensions: 20 cm;25.5 cm;;;
house;building